Are European importers taking advantage of the low Rand? 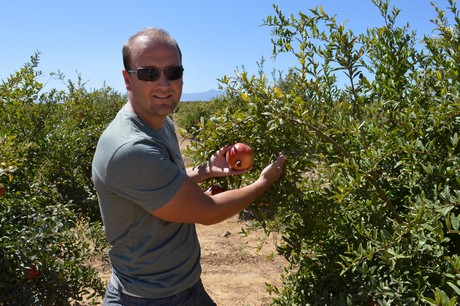 Pomegranates are one of the hot, trendy fruits at the moment and South African growers are getting in on the action. Brent Geddes from Pomona invited us along to take a look at his orchards and the packhouse Fruit2U, where his fruit is packed.
Pomona begun harvesting pomegranates around mid-February, Brent has 100 hectares of Wonderful and Herskovitch pomegranates.

Water is a major issue in South Africa at the moment and there are shortages in the Eastern Cape especially. “We have one borehole that supplies water to this entire 80 hectare site. The Marmsbury fault that runs under this whole Swartland area, and if you can tap into one of the strong veins, you will have plenty of water,” explains Brent.

The earlier Herskovitch variety has already been harvested. Although the Herskovitch is a great variety, with a lovely colour, it gives a lot of quality issues according to Brent. He is planning to take out about 15 hectares and replant with the Wonderful variety.

“70% of the planting in South Africa are Wonderful. All the new varieties that are coming in have protection rights, but I struggle to find a fruit that can compete with the Wonderful. The yields are fantastic, no quality issues, great internal colour. The problem here is the external colour, it’s very difficult to get a full red colour.”

The harvest period for pomegranates is very short starting mid February and ending in April.

Pomegranate harvest is best done before the rains. One issue is that people won’t come out and pick in the rain. The other issue is that too much water too quickly during the harvest period is not good for the quality of the fruit, as it leads to fruit cracking.

The larvae of the False Codling moth feeds primarily on fruit crops and hence is quite destructive, and a problem throughout Southern Africa. Geddes decided to take a few extra precautions, by building ‘bat hotels.’
“The bats eat the false codling moth. It takes a long time to populate the bat hotels. We put them up about 2 years ago, and they’re not full yet. It takes about 4-5 years before they are full. This year we had very few moths but this was more due our effective spraying program than to the bats.”

The European market has been a very strong one for South African fruit in the past, and South African growers have always benefited from the Rand being a little weak. However, things may be changing, and Geddes explains that in their main markets, Europe and the UK, importers could be taking advantage of the Rand having depreciated so much this year.

“It’s very interesting at the moment. Emerging market currencies have been destroyed in the last 24 months, particularly the last 12 months. This time last year when we were exporting into Europe, we were getting 12-13 Rand to the Euro, this year its R17 to the Euro. Depreciation of the currency is not just happening in South Africa our competitor’s currencies have also depreciated and the Europeans are on to that.”

He said that they are hearing that the markets are incredibly short, no-one can find supplies of pomegranates, and there is very little on the Rotterdam market, very little in Singapore. But according to Brent the Europeans are digging in their heels and saying they will pay 20-30% less than last year in Euros because they know everyone is ultimately going to buckle and as they are still making 10% more in Rands than last year, but in fact they could be making 40-50% more.

When asked if South African growers would stand together and fight back, Geddes said: “We can’t really, because the market here is not that close, and it seems to be quite competitive. So we’re finding that its a bit fragmented. Most of the pomegranates are sold through export companies which are separate from the growers who are not that up on the exchange rate and Euro prices.

“There’s a massive demand for pomegranates, we literally can’t sell enough. We export into Rotterdam and directly into the UK. Then some to Singapore, Hong Kong, and Malaysia. These are markets we are trying to grow. We’re finding that Malaysia and Hong Kong are paying the same prices as last year, so we’re trying to sell a bit more fruit there.”

“Russia want the big fruit, Hong Kong too, but because this year has been a small fruit year due to the drought we’re not getting enough of the big fruit to send to them, but they would be willing to pay the price if we could produce the big fruit,” explained Geddes.

“Competition from Peru will start in the next week or two. They come into the market quite dramatically. Israel will start production around July-August and they’ve got good storage techniques so sometimes their stock can still be around in January.”

“European buyers prefer to work with just one or two companies, and that’s probably why the exporters do well here. The companies in Europe deal with Sapex and Star South, who are exporters that export pomegranates, grapes and citrus. They go out and search for the farmer, and they deal with the European import company, who then sell it on the market. So it’s not the farmers that are dealing directly with the importers a lot of the time. There are bigger farming groups who do do that, but very few of them. It’s mainly exporting companies that have a group of farmers behind them.”

Geddes expressed his love for the industry, and for pomegranates in particular: “I think there is still a very bright future for pomegranates. I would probably prefer to plant more Wonderful pomegranates because I’m becoming an expert in that and I understand the risks and know the market. Whereas to start growing a different type of fruit like lemons, it seems simple but even within a lemon there are different varieties that you need to be on top of.”

“There is a very bright future, and we’re very excited about it. The processing market is growing, the prices for processing grade fruit is increasing, so there’s a home for all the different kinds of fruit. It’s processed all over the world, in Johannesburg, Egypt, and Ghana. People are buying pressed in Malaysia, there’s a big market for that in shops where they’ve got pomegranate presses and they want processing grade fruit to press fresh pomegranate juice.”